Here we provide an example of applying the Monte Carlo method to simulate the adsorption of additive binary gas mixtures on solid surfaces [1]. The additive gas mixture of two components means that lateral interactions are considered only for the adsorbed molecules of the same type. For example, the binary system of A and B components is described by thwo types of lateral interactions: A-A and B-B, but not A-B.

Please download the model Binary_gas_mixture.zip. As a model of the surface we use the square lattice with a distance between nearest neighbor sites. See the sample_empty_unit_cell.xyz file. There are three state of the adsorption site in this model. They are set up in the following xyz-files: adsorbate_state_0.xyz, adsorbate_state_1.xyz and adsorbate_state_2.xyz for an empty site, for a site occupied with A molecule and molecule B. All states in the model are represented by monomeric spherical particles. We assign a mark to all the possible surface states (molecule A - atom N, molecule B - O, empty - H). The name of the state in each xyz-file can be found in the head of the corresponding file. The above mentioned lateral interactions between A-A, A-B and B-B molecules are specified in the energy file and equal to 4.0, 0.0 and 6.0 kJ/mol, respectively.

Please also download the following script mc_binary_gas.py and read below what the script does.

as lt.set_ads_energy we set the state energies of the available adsorption complexes as lt.set_ads_energy. Note that in this tutorial, the chemical potential of the components muA and muB means the differences between molar Gibbs free energy of the component in the gas phase and adsorption layer \(\mu_{Bgas} - \mu_{Bads} \approx-RTlnp_B\). The chemical potential of the A component will be varied in the simulation, so it will be set up further.

Here we run the m simulation for each value of the chemical potential of the A component in the range from 20 to -30 kJ/mol with step of -2 kJ/mol. Each time we set new value of the A component chemical potential using lt.set_ads_energy. make_metropolis function creates a task m for Monte Carlo simulation. Here we perform 100 000 Monte Carlo steps (MCS) for the system relaxation and 50 000 MCS for thermal averaging over the 50 points. Recall that MCS is the amount of attempts to switch the state of the lattice equaled to the amount of the lattice sites. Every 1000 MCS in the production run we save the xyz-snapshots having 50 snapshots at the end of the simulation at each value of the muA. It takes about 25 min on an average CPU.

We have obtained as simple averages the total (H) and potential energy (U) of the adlayer per lattice site, the total surface coverage (coverage), partial coverage of the surface with A (A_cnt) and B (B_cnt) molecules at the temperature 100 K changing the chemical potential of the component A from 20 to -30 with step = -2 kJ/mol. Also we have calculated the differential heat of adsorption (Qd) and heat capacity (C). All averages are calculated using 50 points. Results are saved in file. 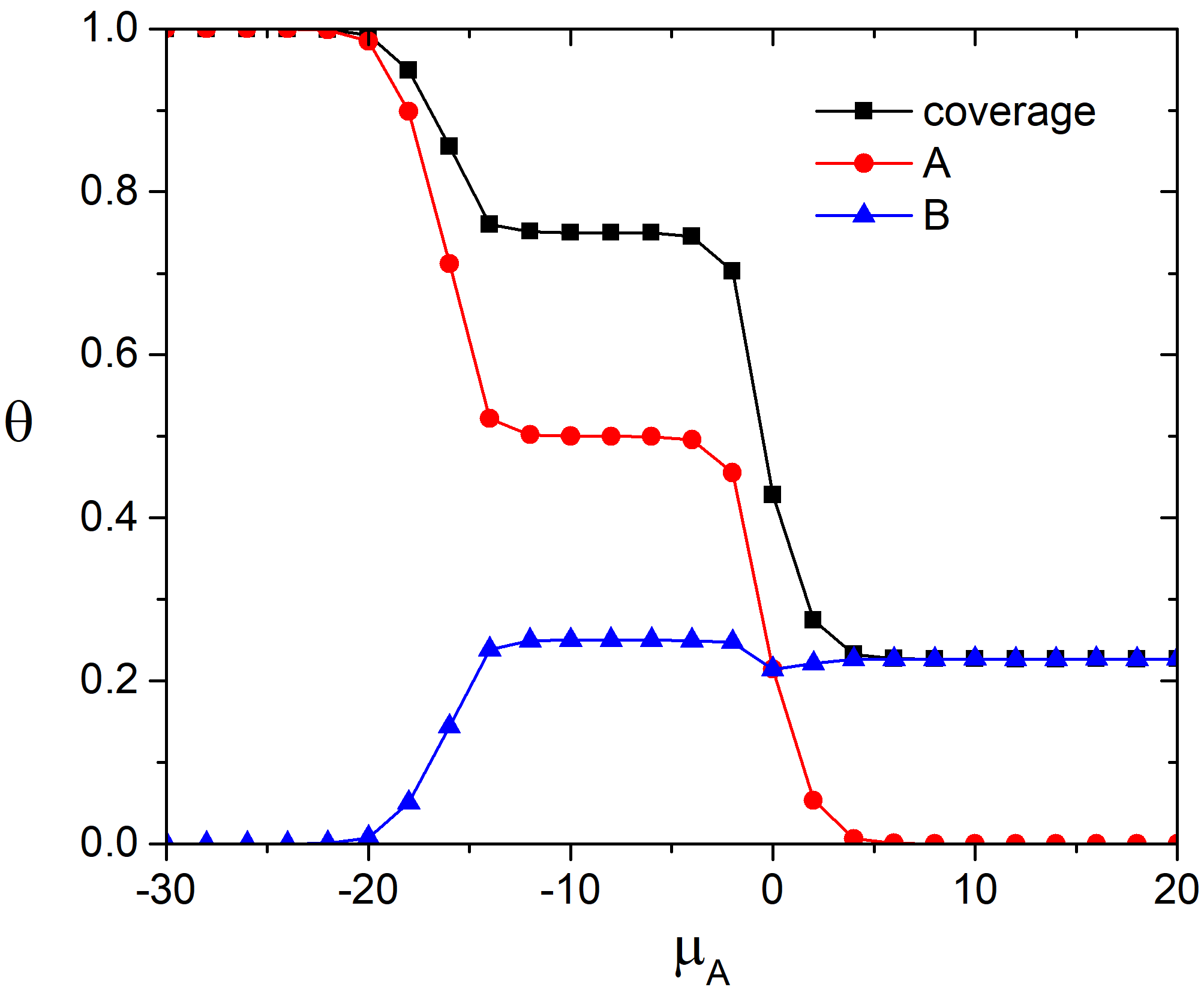 Animation on the Fig.2 illustrates the loading of the adlayer with increase of the chemical potential of A component. 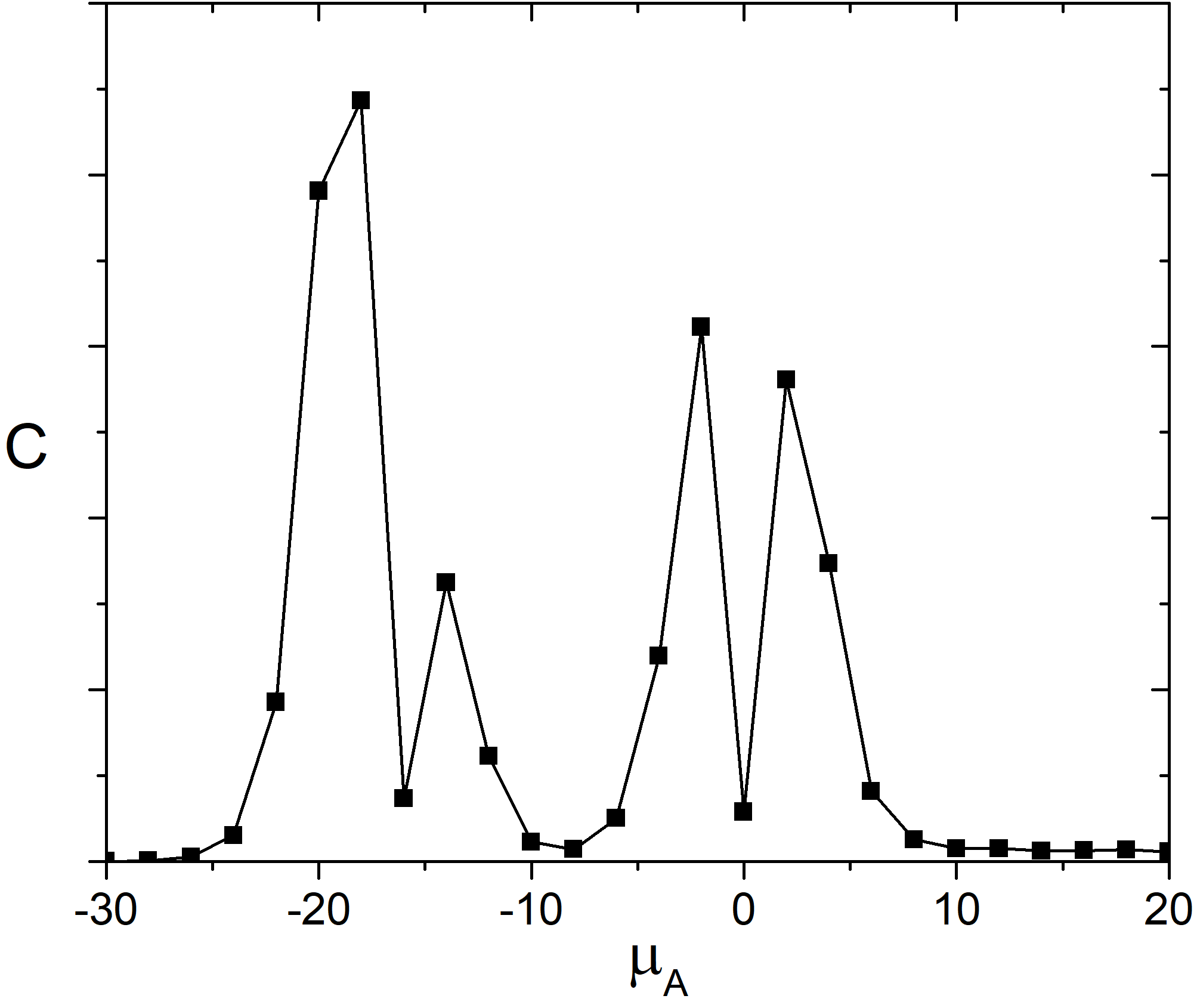 Detailed discussion of this and other results on adsorption of the binary gas mixture can be found in the papers 1 and 2.